Jessie by all accounts seemed to have quite a close relationship with her brother Andrew.  Andrew's great grandson Harley Couper has written the following account of his VERY interesting and exciting life at sea:

http://tauranga.kete.net.nz/remembering_war/topics/show/1478
Posted by Jac at 12:59 PM No comments:

I obtained some family birth and death certificates lately, Martha's showing that she had died at Ashburn Hall in 1927.  Ashburn Hall was a clinic for the mentally unwell.  The Hocken Archive in Dunedin has copies of admission documents and case notes, and the following were taken from Martha's records:

Martha Blair - admitted 8 February 1926 with "advanced Tuberculosis of the lung and Melancholia". Her occupation listed as "Teacher of small private school".

"She is dull and depressed, takes no interest in anything, is slow in answering simple questions, says that there is not hope for her, that she will never be well, that she is no longer a Christian.  Her general appearance, conduct and conversation indicate that she is labouring under acute mental depression."

The rest of the case notes record a sad physical and mental decline from March 1926 through to her death in  June 1927, and while it was originally my intention to put these notes on the blog, out of respect for Martha I won't.

She was visited by her sister Florence during her time there, and the tone of the case notes suggests a great deal of care and concern for Martha.

I am keen to hear more about Martha and her life prior to this sad decline from the older members of the  family.
Posted by Jac at 8:50 PM No comments:

Mum's Uncle Athol, my grandfather Darcy Blair's brother recalls that Andrew Blair travelled to India at some point, perhaps as part of his seafaring lifestyle, and lost his hair after coming down with Yellow Fever.

Athol's brother Haddin was given a rhinocerus hide walking stick from his Uncle Andrew after one of his journeys.  This is now in Haddin's son Ian's possession, though he describes the 'stick' as being quite flexible...perhaps a whip?

I would like to learn more about Andrew Blair, as it seems he lived a very interesting life, and travelled widely.
Posted by Jac at 1:11 AM No comments:

The search for Jessie's grave...Mahabaleshwar

Undeterred by being unable to find Jessie in Pune, we decided to have a look at the now privately owned Christian Cemetery in Mahabaleshwar - just in case.  After a visit to the cemetery's owner at his hotel we obtained permission and the keys to the cemetery.  The cemetery was small, about 1/2 acre, well maintained, and sadly did not contain Jessie's grave or any other missionaries from the PIVM.

The question then is - where were these missionaries buried?  There is one other cemetery in Pune, near Dhobi Ghat that we did not get a look in.  All the other cemeteries contain war graves from the time of the British Raj.

The hunt for Jessie's grave...in Pune

While we were in Pune, having heard from UK sources holding Jessie's death certificate, that she died in Pune we attempted to find Jessie's grave in the St Sepulchre Cemetery in Sholapur Road.

This cemetery is divided into two parts, the Indian burials on one side of the road and European on the other, which is then also in two parts, pre 1900 and post 1900.  It was with some difficulty that we negotiated our way to the correct part of the cemetery.

Unfortunately the cemetery is in a state of disrepair with people living amongst the grave stones at the entry, and making market gardens towards the rear of the cemetery.  Many of the gravestones have collapsed and lie amongst dense foliage.  Having unsuccessfully tried to source records for the cemetery we decided to chance it and see if we could find Jessie's grave.

It was while we were scrambling through the bushes and long grass reading the gravestones that mother said "do you know if India has snakes?".  "I don't know" I replied, and we carried on.  Turns out India has 38 species of snake, 18 of them of the unpleasant variety.  Apparently they don't come out in the heat of the day, and we were searching in the heat of the day...thankfully.

Despite our best efforts, and some very interesting reading, we were unable to find Jessie, or the graves of any other missionaries. 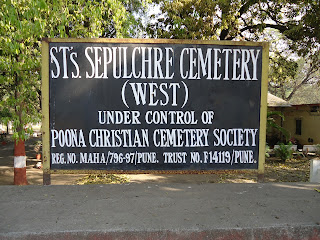 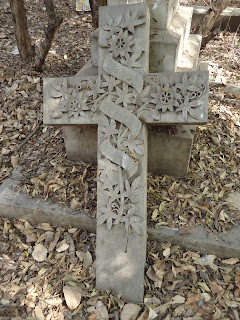 To hedge our bets while we were in Pune, we went to St Andrews, which in a former life was a Church of Scotland church.  We were informed that it had never had a graveyard and now belonged to the Hindustani Christian Church. They were very welcoming and let us look through the old stone church, which was being renovated inside after a catastrophic fire in November last year which destroyed the stained glass windows and the original seating, and furniture.

Situated just down the road from the PIVM headquarters at Napier Road, it is likely that Jessie would have attended some services here. 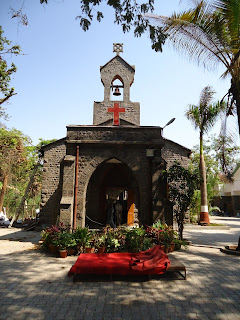 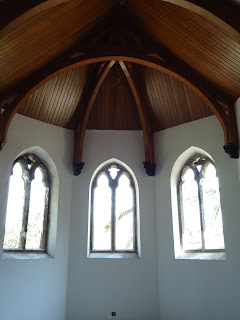 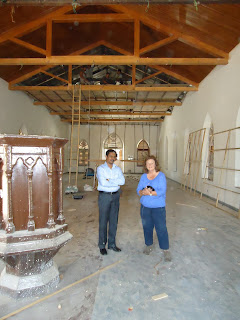 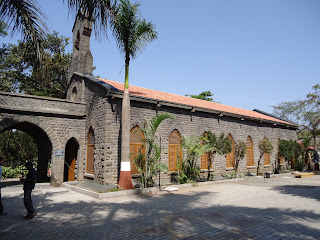 Mum, myself and Mahabaleshwar

On 10 March mum and I left NZ for Mumbai, India, where we spent a day before travelling by private car to Mahabaleshwar around 6 hours away.  There we had a local guide, Dittah, a university student who grew up in Mahabaleshwar, who showed us all the places Jessie talked about in her letter home.

I have inserted pictures along with text from Jessie's letter:

"The journey here is a very long one...[after a refreshing cup of tea at Wathai] we drove 38 miles uphill..." 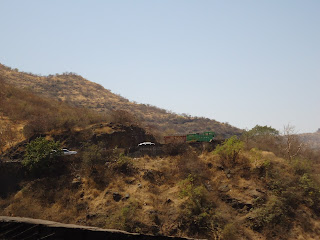 ""Whenever daylight appeared we roused up from our sleepy condition, and enjoyed looking on the plains below us and the hills around us..." 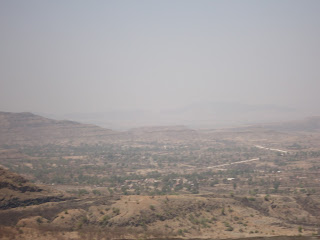 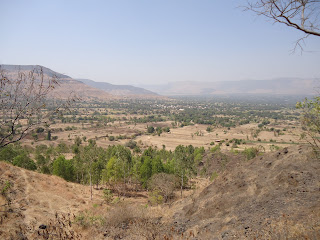 "When we reached Panchgani, men followed us selling strawberries and flowers..."


"We were glad to reach our destination...where we were warmly welcomed by one of the American missionaries, who invited us to have breakfast with her in the next bungalow [Norheim]"

Unfortunately we were not permitted to photograph "Norheim" but it is almost identical to "Ilona" and only around 30 metres away, situated on the same driveway.

"We are staying at a nice little bungalow (Ilona) which belongs to some of the members of our mission.  It is situated high up in the pretty jungle trees, and from the verandah one of the prettiest views in Mahabaleshwar can be seen..." 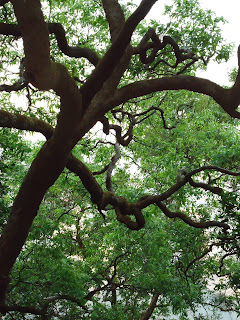 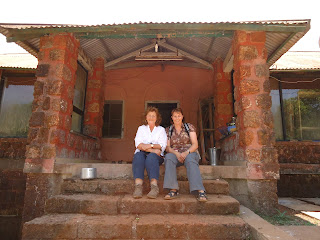 "About a minute's walk from the bungalow brings us to a point where we can see the lake..."


"The soil is very red here, and the red roads shaded by the green trees seem to invite us out for long walks..." 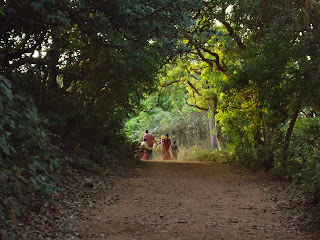 "The sunsets here are magnificent, and we generally arrive at some high point to view them from.  After the sun has set we linger to see the afterglow."


"While visiting Old Mahabaleshwar one evening - a village about two and a half miles from here, we looked into two large temples..."


"The Fountain Hotel is occupied this summer entirely by missionaries, and there twice a week at 5 pm Mr Lowe conducts a bible reading..."


We were unable to visit the now privately owned bungalow that the Lowe's stayed in, "Bonne Vue" which is some distance away (10-15 minutes walk) from "Ilona".  Our guide phoned and asked permission, but this was denied.

The Fountain Hotel is currently being renovated, so our plans to lunch there, look around, and ask regarding any pictures/chattels from Jessie's time were thwarted.

On the whole incredibly satisfying to have seen with our own eyes what Jessie described in her letter, and to have 'walked where she walked'.
Posted by Jac at 2:01 AM 2 comments:

Andrew Blair in insert.  In the back row Jack, George (my grandfather's father) and Jim.  Very dashing looking chaps.  John Blair and Martha are in the middle of the photograph and then the girls are left to right: Martha, Florence, Mary and Jessie.  This photograph was taken from the original on my cell phone, I'll upgrade it to a higher resolution picture at some point. 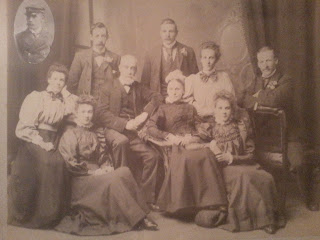 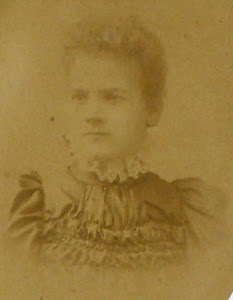